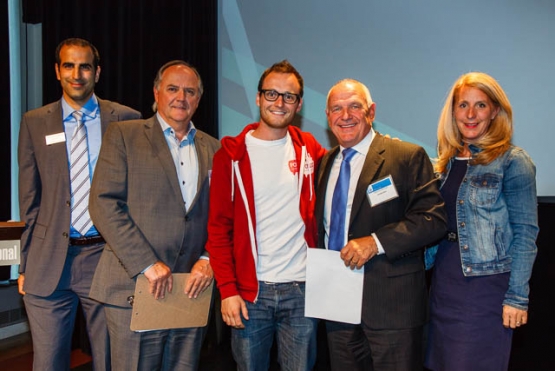 Montréal, June 4, 2015 – The first edition of the "Real Estate's Cleverest" contest will allow three companies to showcase their services and present them to more than 500 Canadian commercial real estate professionnals next September. Jury members questioned company representatives as the nine finalists made their pitches on Wednesday night at the Monument national where the last leg of the contest was held. After much deliberation, the judges chose the three following companies (clic on the name to consult the company website):

The winners will get another chance to wow the national real estate community at BOMEX® 2015  in Québec City from September 15 to 17 septembre.  First, they will have 15 minutes to present their company before one of the BOMEX conferences. Then, each team will have its own tradeshow booth - a $1,900 value.

The finalists had been chosen by a selection committéé that included members of BOMA Quebec and of the Ivanhoé Cambridge Real Estate Chair ESG UQAM. The finalists included BEEYE, Elipto, Immovation, Otus Innovation, NAVUT and SmartMoov.

The organisers would like to thank the members of the jury: Ms Caroline Lambert from Redbourne; Mr Jean-Guy Bernard from Groupe Altus and Mr. Guy Lamarre from Ivanhoé Cambridge.

The contest was organized by BOMA Québec, in cooperation with Ivanhoé Cambridge Real Estate Chair ESG UQAM. The goal of the contest is to offer a unique showcase for the next generation of real estate entrepreneurs. For BOMA Québec it is also an opportunity to reiterate the association's commitment to young professionals.